Learn about our participation in weCARE Day

The Grounds Guys of Barrie Hike for Simcoe Hospice

Hospice Simcoe invited friends and family to walk or hike and participate in family activities during Hike for Hospice, which was held at Sunnidale Park on Sunday May 3rd, 2015.

This is the 11th annual event — held in conjunction with thousands of people across the country — honours the memories of loved ones with the theme of ‘Thanks for the Memories’.

Clients suffering from many different kinds of illnesses get support through many programs, including pain and system management with social, psychological, spiritual and practical support.

Hospice also provides support groups for loss and grief, and its focus is on caring about the life and the memories that were created through it.

Hike for Hospice has become an annual tradition to honour family and loved ones, and to also gather pledges to support hospice programs.

A memorial banner is back again this year to write special messages to honour those people who participants are hiking for.

Money from the hike provides physical, emotional, and social assistance to patients and families of loved ones.

While the hike is co-ordinated nationally, 100% of the funds raised during Sunday’s Barrie event — which has a fundraising goal of $30,000 — stays in the Simcoe County community and will be going towards the visiting and residential hospice as well as grief and bereavement programs.

At this years SFEST14 Gala Awards Dinner, The Grounds Guys™ Team from Barrie were the recipients of three awards.

Team member Barb Cotie was personally recognized for exuding what it means to live the Culture of Careand creating a truly remarkable experience for her fellow team members. With all of her hard work and dedication, she was this year’s recipient of the “Grounds Guys Team Member of the Year”. She was awarded this because of her dedication to the job, and taking care of our staff. We all know last winter was tough and she wanted to make sure that our staff knew we appreciated their hard work. Barb took it upon herself to get up at 3am and make 40 breakfast burritos and then drive them around site to site and hand deliver them to our staff. Barb we love you and truly appreciate all you do for us!

A big congratulations goes to Justin Scott and his team for winning the most prestigious award of the night, “The Grounds Guys Franchise of the Year”. This award is presented to the Franchisee who has consistently grown through proper training and management of their organization and has had a consistently high level of sales through quality, professional service.

Way to go Justin and team for your amazing efforts this year!

The team from Grounds Guys Barrie participated in this year’s Monika Day by contributing a day of work to the Hospice Simcoe, a centre that comforts and empowers those living with life-threatening illness and bereavement. Workers of Grounds Guys Barrie and Sprinkler Guys Barrie, both franchises owned by Justin Scott, spent much of the day helping out with landscape work. The local news even showed up to film a short piece on the work. Good job Team Barrie! 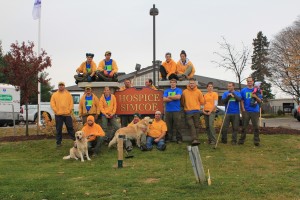 The Grounds Guys™ Team from Barrie was announced as the winners of the Top Service Quality Award at the Grounds Guys™ 2011 reunion in Indianapolis, Indiana. The award went to the franchise that received the highest score generated from random quality assurance inspections and feedback from customers. Congratulations Justin Scott for your commitment to quality excellence! 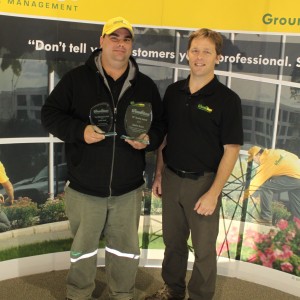